Finland and the United States, 1917-1919 -Early years of mutual relations

The attitude of the American government towards the Finnish problem, which appeared on the international forum after the outbreak of the First World War, was determined by factors going far beyond bilateral contacts. It was directly linked with American war and post-war policy towards Russia, Germany and the problem of supply Europe with food. The proclamation of the independence of Finland, outbreak of the Finnish civil war and, later, drawing of this country into the sphere of influence created by Berlin in Central Europe caused that Finnish-American relations could not develop themselves but became passive and, ultimately, they were frozen for several months. The Department of State was considering whether Finland should be recognised as one of enemies of the United States. And the Finnish government, sure that future of Finland should be linked with prospects of the German victory in the World War, also did not show any desire to activate political contacts between Helsinki and Washington. The best evidence of the American attitude towards Finland adopted during spring and summer of 1918 was the statement of the Acting Secretary of State, Frank L. Polk that the United States were interested in Finland if she could be used as a pawn in a game for the victory in the World War showed the intentions of American leaders towards this country. Still the reorientation of the internal policy of Finland exerted by the military defeat of Germany created premises for the gradual stabilisation of Finnish-American economical and, later, political relations. The process of improving mutual contacts between both states was ultimately crowned by the initiative of the American diplomacy which resulted in the recognition of Finland by the great powers of Big Five. The Finnish question gained some significance in the policy of the United States only during the peace conference (which the Finns were not allowed to take part in). Though it was not some exposed place but just in Paris Finland, for the first time, became, in the eyes of American leaders one of the real subjects of the international policy. 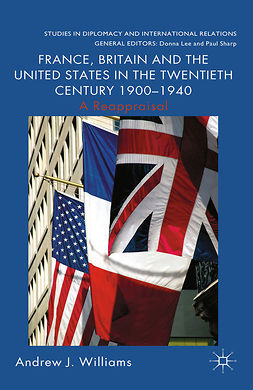 France, Britain and the United States in the Twentieth Century 1900–1940