SIMATIC is the worldwide established automation system for implementing industrial control systems for machines, manufacturing plants and industrial processes. Relevant open-loop and closed-loop control tasks are formulated in various programming languages with the programming software STEP 7.
Now in its sixth edition, this book gives an introduction into the latest version of engineering software STEP 7 (basic version) . It describes elements and applications of text-oriented programming languages statement list (STL) and structured control language (SCL) for use with both SIMATIC S7-300 and SIMATIC S7-400, including the new applications with PROFINET and for communication over industrial Ethernet. It is aimed at all users of SIMATIC S7 controllers.
First-time users are introduced to the field of programmable controllers, while advanced users learn about specific applications of the SIMATIC S7 automation system.
All programming examples found in the book - and even a few extra examples - are available at the download area of the publisher's website. 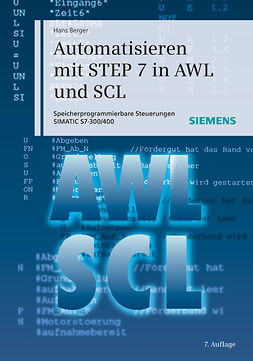