It’s likely that you think of the funeral industry as a sombre one, populated by serious, grey-faced individuals whose days are filled with nothing but sadness and grief… but you couldn’t be further from the truth, as Harry Pope reveals in this hilarious memoir of his time as a funeral director.
Over the course of his career, Harry was involved in more than a few unusual incidents. In his early days, colleagues and eventually mourners broke into laughter as he somehow ended up sliding into a grave with the coffin coming to rest on top of him. Another day saw Harry get the fright of his life when he heard a knocking coming from the rear of the hearse, where no living person should have been. And as for the coffin that he just about prevented from being emptied onto the tarmac at Heathrow Airport… well, you’ll just have to buy the book!
As well as these hilarious anecdotes, Harry introduces us to the hidden and often tragic world of the funeral arranger, with a look at his involvement in disasters such as the Piper Alpha oil rig, the Lockerbie bombing and the sinking of the Herald of Free Enterprise.
With stories that will make you cry with tears of both sadness and laughter, this fascinating read is perfect for a wide and varied audience. 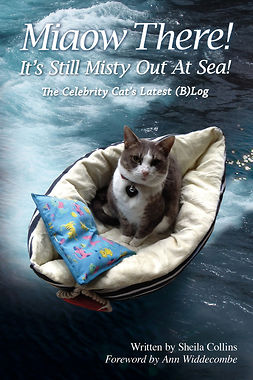 Miaow There! It's Still Misty Out At Sea!

Miaow There! It's Still Misty Out At Sea!