Volume 1 of 2.
‘The Old Army’ is devoted to the regiment’s doings before the Great War. It begins with the regiment’s origins as the 100th Prince Regent’s County of Dublin Regiment of Foot, which was raised to fight in the War of 1812-14 against the young United States. Becoming the 100thn Royal Canadian regiment, the unit was stationed in Montreal and Quebec, and then brought to Britain where ity trained at Aldershot and Shorrncliffe before being stationed in Malta and Gibraltar, then India and ireland. It saw service during the Indian Mutiny at the storming of Jhansi, and continued on colonial service in Aden, the Mediterranean, India and Ireland - as well as its native Canada and the West Indies - for the rest of the 19th century. This volume is accompanied by four maps and four illustrations.
Prior to its disbanding in 1922, the regiment was stationed in the occupied Rhineland, in India and was on peace-keeping duties in Silesia, disputed betweeen Germany and Poland. This is a meaty history, which will interest anyone curious about Canada’s colonial regiments, and their role in the Great War. Both volumes come with an index. 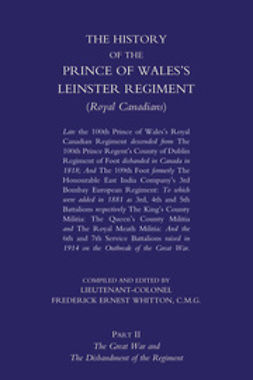 The History of the Prince of Wales's Leinster Regiment - Volume 2