The 19th (Western) Division, known as the “Butterflies” from its divisional sign, an open-winged butterfly, began to assemble on Salisbury Plain in September 1914, one of the divisions of Kitchener’s Second New Army. It sailed for France in July 1915 and came under command of the Indian Corps, and at the end of August took over its first sector of line, Givenchy to Festubert, from the 7th Division.
The division’s first major taste of action was the battle of Loos, and although only one of its brigades was fully committed the overall casualties amounted to some 2,000. The division was at the Somme for the early battles of the offensive, its great achievement was the capture of La Boisselle after intensive fighting during the period 2–5 July. It was here that 34th Division had suffered the highest casualties of any division on the first day, 1 July, in a vain attempt to take the village. The cost to the 19th Division was around 3,500 and today their memorial stands in front of the village church. It was in this action their first VCs were awarded – three of them.
In March 1917 the division made its first appearance on the Ypres front and in June distinguished itself at Messines, earning the congratulations of the Army Commander, Plumer. It remained in the salient throughout Third Ypres, its main effort being at the Menin Road battle, 20 - 25 September when its losses numbered just under 2,000. The division was again heavily involved in the German 1918 offensive, on the Somme, the Lys and down on the Aisne where it had been sent for a rest; the Germans struck there just after the division had arrived. Between the start of the German offensive, 21 March, and the end of May 1918 casualties totalled 11,250. During the final, allied advance to victory the division was not seriously engaged until the Battle of the Selle in mid-October. By the end of the war the casualty roll numbered 39,381.
This is a very competent and well-written account of a division that was lucky enough to be led by two good commanders for most of its time on the Western Front – Tom Bridges and ‘Ma’ Jeffreys. The narrative is clear, easy to read and with good maps to back up the operational detail. There is are no casualty lists nor lists of honours and awards, but the citations of the eight VCs awarded are given. Unusually there is a section on personalities, comments (all favourable) on certain officers, mainly lieutenant-colonels and above. Changes in command at divisional and brigade level are shown as well as order of battle. 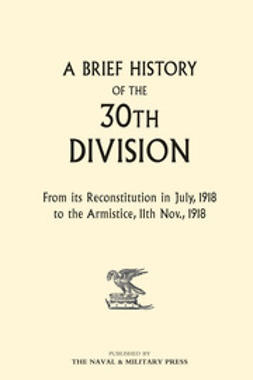