Hundreds of thousands of hockey fans around the world are addicted to Down Goes Brown, and with good reason: Sean McIndoe is the funniest writer in hockey. His often insightful, always entertaining posts have made the site one of the top hockey blogs in the world—and definitely the most amusing. From shrewd observations to tongue-in-cheek commentary, Down Goes Brown manages to capture the essence of hockey while exposing the frequently funny side of the sport. Now, in The Best of Down Goes Brown, McIndoe himself compiles some of the blog's best-loved posts, along with a host of all-new content, in one side-splitting volume.

Packed with fan favourites, including The Code: Hockey's Unwritten Rules Revealed, The official map of an NHL rink, A complete transcript of every NHL game ever broadcast, What an official NHL trade call really sounds like, An NHLer’s guide to never saying anything interesting, The other former NHL stars who interviewed for Colin Campbell’s job, and more, many of which have become so ubiquitous that readers who have never even heard of Down Goes Brown know them by heart, the book is the ultimate gift book for hockey fans everywhere.

Sure to hit hockey fans right on the funny bone, The Best of Down Goes Brown is the ultimate anthology of the very funniest writing from the world's largest hockey humour blog. 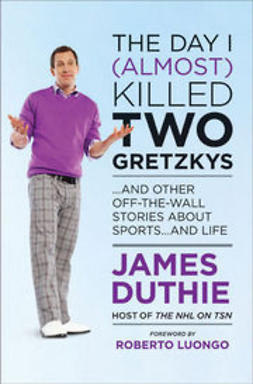 The Day I (Almost) Killed Two Gretzkys?: And Other Off-the-Wall Stories About Sports...and Life