What is this book about?

VBA is the programming language for the Microsoft Office suite and many other applications. VBA gives you complete control of Excel, allowing you to do anything from automating Excel tasks to developing full applications, using Excel as the development environment.

Excel 2002 is an important upgrade to the Office suite spreadsheet program. It shows Microsoft's commitment to moving Office to be a web-enabled productivity tool, a rich client for working with web-based data, with new features such as SmartTags and XML support.

Based on the successful content and format of Excel 2000 VBA Programmer's Reference, this new edition has been fully updated for Excel 2002. The authors are all Excel MVPs, involved daily in supporting the Excel VBA programmer community.

What does this book cover?

The first part of the book introduces Excel and VBA, including a VBA primer. The second part offers thematic, succinct, and practical discussions of the features available to Excel VBA programmers, with real-world examples answering frequently asked questions. The third and final part is a complete reference to the Excel, VBE, and Common Office Object Models.

Here are just a few of the things you'll learn in this edition:

Who is this book for?

This book not only caters for beginner- and intermediate-level programmers with its introductory coverage of VBA and Excel, but also provides advanced information for experienced Excel developers in later chapters and the reference. 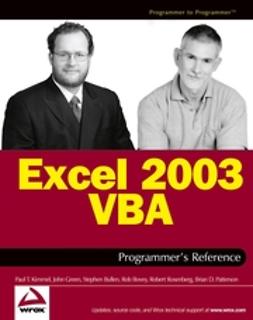 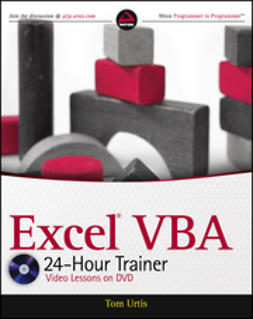