Pop music and rock music are often treated as separate genres but the distinction has always been blurred.  Motti Regev argues that pop-rock is best understood as a single musical form defined by the use of electric and electronic instruments, amplification and related techniques. The history of pop-rock extends from the emergence of rock'n'roll in the 1950s to a variety of contemporary fashions and trends – rock, punk, soul, funk, techno, hip hop, indie, metal, pop and many more.

This book offers a highly original account of the emergence of pop-rock music as a global phenomenon in which Anglo-American and many other national and ethnic variants interact in complex ways.  Pop-rock is analysed as a prime instance of 'aesthetic cosmopolitanism' – that is, the gradual formation, in late modernity, of world culture as a single interconnected entity in which different social groupings around the world increasingly share common ground in their aesthetic perceptions, expressive forms and cultural practices.

Drawing on a wide array of examples, this path-breaking book will be of great interest to students and scholars in cultural sociology, media and cultural studies as well as the study of popular music. 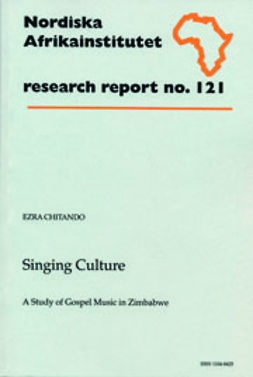 Singing Culture: A Study of Gospel Music in Zimbabwe