Acts of martyrdom have been found in nearly all the worlds major religious traditions. Though considered by devotees to be perhaps the most potent expression of religious faith, dying for ones god is also one of the most difficult concepts for modern observers of religion to understand. This is especially true in the West, where martyrdom has all but disappeared and martyrs in other cultures are often viewed skeptically and dismissed as fanatics. This book seeks to foster a greater understanding of these acts of religious devotion by explaining how martyrdom has historically been viewed in the worlds major religions. It provides the first sustained, cross-cultural examination of this fascinating aspect of religious life. Margaret Cormack begins with an introduction that sets out a definition of martyrdom that serves as the point of departure for the rest of the volume. Then, scholars of Christianity, Judaism, Hinduism, and Islam examine martyrdom in specific religious cultures. Spanning 4000 years of history and ranging from Saul in the Hebrew Bible to Sati immolations in present-day India, this book provides a wealth of insight into an often noted but rarely understood cultural phenomenon. 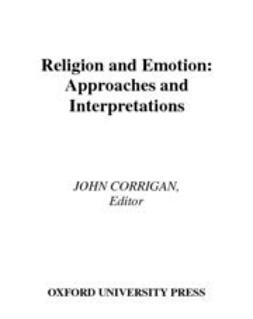 Religion and Emotion : Approaches and Interpretations