Nearly a century and a half after his death, Abraham Lincoln remains an intrinsic part of the American consciousness, yet his intentions as president and his personal character continue to stir debate.
Now, in The Lincoln Enigma, Gabor Boritt invites renowned Lincoln scholars, and rising new voices, to take a look at much-debated aspects of Lincoln's life, including his possible gay relationships, his plan to send blacks back to Africa, and his high-handed treatment of the Constitution. Boritt explores Lincoln's proposals that looked to a lily-white America. Jean Baker marvels at Lincoln's loves and marriage. David Herbert Donald highlights the similarities and differences of the Union and Confederate presidents' roles as commanders-in-chief. Douglas Wilson shows us the young Lincoln--not the strong leader of popular history, but a young man who questions his own identity and struggles to find his purpose. Gerald Prokopowicz searches for the military leader, William C. Harris for the peacemaker, and Robert Bruce meditates on Lincoln and death. In a final chapter Boritt and Harold Holzer offer a fascinating portfolio of Lincoln images in modern art.
Acute and thought-provoking in their observations, this all-star cast of historians--including two Pulitzer and three Lincoln Prize winners--questions our assumptions of Lincoln, and provides a new vitality to our ongoing reflections on his life and legacy. 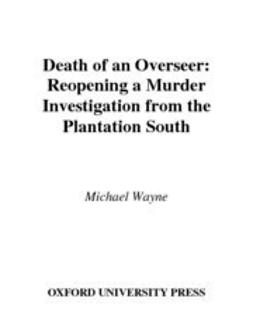 Death of an Overseer : Reopening a Murder Investigation from the Plantation South