During the Civil War, Northerners fought each other in elections with almost as much zeal as they fought Southern rebels on the battlefield. Yet politicians and voters alike claimed that partisanship was dangerous in a time of national crisis.
In No Party Now, Adam I. P. Smith challenges the prevailing view that political processes in the North somehow helped the Union be more stable and effective in the war. Instead, Smith argues, early efforts to suspend party politics collapsed in the face of divisions over slavery and the purpose of the war. At the same time, new contexts for political mobilization, such as the army and the avowedly non-partisan Union Leagues, undermined conventional partisan practices. The administration's supporters soon used the power of anti-party discourse to their advantage by connecting their own antislavery arguments to a powerful nationalist ideology. By the time of the 1864 election they sought to de-legitimize partisan opposition with slogans like "No Party Now But All For Our Country!"
No Party Now offers a reinterpretation of Northern wartime politics that challenges the "party period paradigm" in American political history and reveals the many ways in which the unique circumstances of war altered the political calculations and behavior of politicians and voters alike. As Smith shows, beneath the superficial unity lay profound differences about the implications of the war for the kind of nation that the United States was to become.
Finalist, 2007 Peter Seaborg Award for Civil War Scholarship 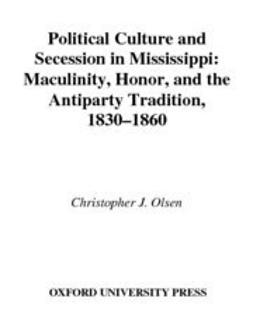 Political Culture and Secession in Mississippi : Masculinity, Honor, and the Antiparty Tradition, 1830-1860